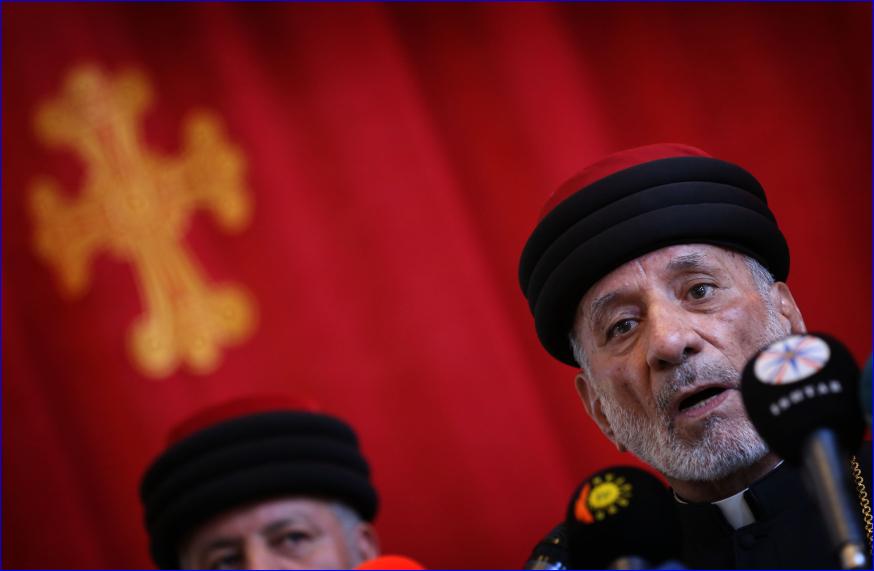 His Holiness was born Warda Daniel Sliwa, in Habbaniyah, Iraq 1941, from his parents the late Daniel Sliwa and Mariam Sliwa. He matriculated from the School of Education at Baghdad in 1964. Then, he taught English in various cities in Iraq for 13 years.

While visiting the US was called by the late His Holiness Mar Dinkha to serve the Church in the ordained ministry. After training in the rites and theology of the Church, he was ordained to the diaconate on April 13, 1980 and was ordained to the priesthood on June 8, 1980. After serving as a priest worthily and continuing his training in the Church, Rev. Polos was nominated the late patriarch and the hierarchy to assume the exalted rank of metropolitan for Baghdad and all Iraq, filling the vacant metropolitan see of Elam, thus succeeding the late Metropolitan Mar Yosip Khnanisho, of blessed memory. Thus, on Pentecost Sunday, June 7, 1981, Rev. Polos was consecrated by the late His Holiness Mar Dinkha IV with the assistance of His Grace Mar Aprim Khamis in the cathedral church of St. George, Chicago.
The new metropolitan was given the name ‘Mar Gewargis.’

After the falling asleep in the Lord of the late Patriarch Mar Dinkha IV on March 26, 2015, the Council of Hierarchs met in synod in the church of St. John the Baptist in Ankawa, Erbil (Kurdistan Regional Government) Iraq between September 16 and 18, 2015. On Friday, September 18, the hierarchs elected His Beatitude Mar Gewargis Sliwa as the 121st Catholicos-Patriarch of the holy see of Seleucia-Ctesiphon. He was solemnly consecrated and enthroned at the same church of St. John on Sunday, September 27, 2015, by two metropolitans Their Beatitudes Mar Aprem Mooken and Mar Meelis Zaia, with the right hand of fellowship of all the hierarchs of the Assyrian Church of the East.

During the course of His Holiness’ ministry in the Church as a metropolitan, he has been able to establish the archdiocesan minor seminary in Baghdad, which produced numerous priests and deacons to serve the Church in Iraq. Some of the students were sent abroad in Europe for doctoral theological studies, and it was expected that they returned and served the Church in Iraq and contribute to the formation of a proper seminary for the Church.
His Holiness as metropolitan established the library of the metropolitan’s residence, which now houses hundreds of ancient manuscripts. While in Baghdad, he established the metropolitan’s press and was successful in printing a number of liturgical books and other volumes of a catechetical nature for the needs of the Church across the globe. In 2009, he established the Urhai (Edessa) private elementary school in Baghdad.

In 1994, after the fall of the USSR, His Holiness began a mission to the Assyrians in the Russian Federation, establishing a number of mission parishes. In that year a permanent priest was assigned for the newly established parish of St. Mary in Moscow, Russian Federation.

The newly build and beautiful church in honor of St. Mary was consecrated. From this point on, the number of priests and deacons to serve the growing community of the Assyrian Church of the East in Russia was increased.
While metropolitan of Iraq, His Holiness has governed the Church in Iraq with great dedication and tireless efforts wherever needed. He travelled to China in 1998 and made contacts there with the Christian Churches. He also made historic visits to the regions of Mardin and Hakkari, while visiting the ancient relics of the Assyrian Church in that country dating back to the early centuries of Christianity.
His Holiness has been active in ecumenical forums and fraternal exchange between the Assyrian Church of the East and other Churches and ecclesial organizations. Most notably, he has been active with the Middle East Council of Churches and the Council of the Heads of the Churches in Baghdad.
As His Holiness embarks upon his sublime archpastoral ministry as the head of the Assyrian Church of the East worldwide, the faithful take hope and consolation in a dedicated and unfailing pastor who care for his flock. May his sublime ministry as the supreme head of the Church be fruitful and give hope to the flock of Christ, purchased by His Precious blood.